Yonaka is a Japanese word meaning âthe dead of nightâ, or âmidnightâ, but it is also the name of one of the most exciting new names coming out of the UK at the moment. With their powerful yet catchy rock, they playfully blend sounds across a multitude of genres and wrap it all in a radio-friendly package as fitting for intimate club stages as for massive festival stages. Musikknyheter first wrote about them back in October, in our 'Se Opp For'-series of bands to look out for.

Having met in Brighton seven years ago when they were doing the same course at university, the band first hung out as friends, and only started playing together three and a half years ago.

The experience of first making music together, vocalist Theresa Jarvis explains, was completely different from anything they had done up until then. âWe had all had other projects before that never clicked. And then we tried playing together and we were like âWow, this is really fucking good!â

Since then the band has stuck together, and have so far released one EP and several singles. 2017 proved their breakthrough year on a more commercial scale, with singles âBubblegumâ and âWouldn't Wanna Be Yaâ getting attention from several major magazines and radio stations, and Yonaka becoming a sought-after name on the live scene.

But what is it about Brighton that makes it the home of so many successful names? âI KNOW RIGHT?â Theresa grins, âseriously, itâs such a hub!â Drummer Rob Mason pitches in: âI feel like everyone there is creative in their own way. It really is a centre for creative people and everyone is either an artist or in a band, or at least in some way imaginative and creative. Itâs a really good environment to come up with new music and to be inspired by.â

Bassist Alex Crosby explains that all the band members come from different towns that were musically dead, which is why they all decided to move to Brighton to study. Theresaâs class when she was doing her A-levels had a total of three people, with her being one of three. Moving to Brighton and experiencing the music scene there was a culture shock for all of them - in the very best way.

And the fact that there are so many creatives in one place attracts more creatives, Theresa says, âYou wanna surround yourself with like-minded people. Itâs just nice to be around people with the same drive as yourself.â

Three and a half years into their career, Yonakaâs music has become an intriguing mix of genres. Itâs not just rock, not just punk, or tribal, or pop, or metal or RnB, or hip-hop, but a blend of all of the above, a by-product of all of the membersâ interests and influences. Theresa grew up listening to Motown whereas the boys grew up listening to rock like AC/DC and Iron Maiden, and that later progressed into heavier stuff.

âItâs quite weird isnât it?â Rob smiles, âyou start out with a base and then you soon go as heavy as you can.â He chuckles and explains that The Kooksâ âNaiveâ is what got him into music, but a year later he found himself listening to Egyptian metal bands. Though the mutual love they all have in common is hip-hop.

Over the last six months, attention has skyrocketed for the four-piece; theyâre in the top half of all the âones to watchâ- and âsound ofâ- charts for 2018. Being a hype band is not Yonakaâs goal though. âWeâre not gonna pop in and then go away. Weâre gonna stay!â says Theresa, determined to prove the band a long-term project. And the pressure that comes with attention doesnât frighten the band at all since the biggest pressure comes from within. âWe put a lot of pressure on ourselvesâ she explains. âIâm always like: Aaargh, this has to be done, and this has to be doneâ¦ We like making things that feel really good and then when we get onstage we get a bit weird.â

Yonakaâs reputation as a live band precedes them. Tales tell of a band with explosive amounts of energy, of walls of sound, and of crowds so frenzied injuries might or might not happen. âGeorge (Edwards, guitarist) hit himself in the face with his guitar onceâ smirks Theresa. âActually it has happened twice nowâ George confirms, âthe last time was at Readingâ¦ During the third song, I thought my face it hurt a bit and thought âahh thatâs gonna be badâ and I felt something run down the side of my face that wasnât sweat!â He chuckles and shrugs, âyou kinda just have to brush it off and keep going.â

âI pushed Georgeâs earplug into his ear,â Theresa says and the rest of the band visibly wince at the memory. âYeah, the in-ear monitor!â Rob nods, âShe grabbed him by the head and likeâ¦â he demonstrates the accident with his arms as the band groans behind him.

Yonaka has a busy summer ahead of them with new music being released at different points throughout the year. A new single is just around the corner, and another EP is set to drop later this year. A debut album is in the works, but wonât be ready until next year.

And in the meantime, the band has a busy summer scheduled, with touring both in and outside the UK. âAre we doing Norway?â Rob asks Theresa who replies âHope so!â and shapes his hand into a megaphone: âHI NORWAY!! WEâRE REALLY GOOD!!â

And yes, Norway, they really are!

"If there's so little of yourself in a song that you can't remember when you wrote it and where, something has gone wrong" 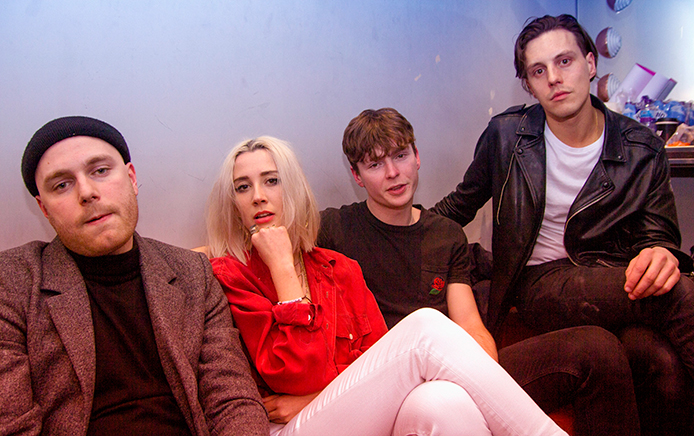