We met Band of Horses at Piknik i Parken, for a chat about music, touring and finding songs in drawers.

Charleston-based Band Of Horses have done increasingly well in Norway, especially in terms of live shows. The band, who just released their fifth studio album Why Are You Ok, have no less than four visits to Norway planned for this summer, with another two headline shows added next spring.

A couple of hours prior to their last Oslo gig, Musikknyheter got the chance to have a chat with the bandâs jovial vocalist, Ben Bridwell. On a private spot behind the festival backstage we met Ben sipping red wine and being happy to be back in Norway again. 'This is maybe our best market' he smiles, and says they hit Norway early. Still with the same promoter, theyâve kept coming back since that first performance at the Ãya festival in 2006, and he feels theyâve grown the band together. 'It takes showing up and playing for people and meeting people face to face, and somehowâ¦ the promo worked?' he laughs, 'doing radio stuff and playing the game the way itâs meant to be played. Norway has one of our biggest fanbases and weâre lucky to be able to keep coming back' he continues, reassuring us it never feels like a chore, 'Jesus no, everyoneâs beautiful and have a ton of money, itâs like the best place to do well inâ.

Aside from Australia, Norway - Oslo in particular - is a place Ben claims to nearly have a better grasp on than his own hometown, 'The streets are a bit all over the place' he muses, 'is there a proper grid?'. Musikknyheter admits that apart from some isolated areas of town, not really. 'Itâs very similar to where we live' Ben smiles, 'Where we live is below sea level and there are a lot of marshes so you canât really do a grid system. You have to build your roads around nature, because you always run into water'.

At the time of the interview, the bandâs latest album, Why Are You Ok is 2 weeks old, and Ben feels that reception this time around has been really good. The band took a beating on the last album, and âthe critics ate it alive', Ben says, 'I threw my phone in the ocean!'

This time around though, things have been going a lot better and slowly and steadily the crowds at gigs start perking up to the new songs as well. The album was produced by Granddaddyâs Jason Lytle, and Benâs eyes are beaming as he tells us how he they met at a show during Band of Horsesâ second album tour, when Lytle surprisingly had come out of the house to see them live. 'Heâs not the most social fella' Ben laughs, 'but even took it upon himself to come introduce himself'. He notes that the whole band are big Granddaddy fans, and had a bit of a âhero-momentâ when Lytle had introduced himself. They stayed in touch, and noticed they were very like-minded in terms of songwriting, always working on a song whether itâs an idea for an album or just for the sheer exercise of it. Over the years theyâve become fast friends and have toured together, sharing buses and personal spaces. When the time came to make another album, Ben couldnât think of anyone heâd rather work with, despite Lytleâs notable lack of experience producing other bands. 'He was a little taken aback by that', Ben smiles, 'produce a bandâs record? Ok..?â. Together they bunked up in a converted water tower called The Barrel House in California, listened to music and talked about the album in the making, and ended up recording the album in the very same place.

The result became an album slightly different to Band Of Horsesâ earlier work, focusing strongly on homelife, family and domestic issues. Ben says having a larger family [than before] and not wanting to have to deal with the conversation of having to leave to write, subconsciously had its affect on the songwriting process as well as the album, 'I was having some trouble at one point trying to figure out what themes I was interested to explore within my own psyche, and I didnât mean for [the album] to be like âDaddyâs coming out partyâ, but in a way those themes seeped into the bones of the album, and other things, like conversations Iâd had the night before or overheard on the street, became ingredients in the soup'.

And quite literally so. The intro to single Casual Party is a rant one of Benâs friends recorded of a collegue who drunkely failed to grasp the concept of Uber, 'You hit that certain level of too much to drink where you see the night decending into chaosâ¦ He is one of those confrontational partyers and he just didnât understand what Uber was. He thought he had to tip this driver and gave him fifty bucks for the ride, and the driverâs like âok bye!ââ, Ben chuckles, 'I had to chop it up and try and find any words without âFuckâ in them, because it was pretty much every other word, haha! Heâs just getting torn apart!'

'It needs to be made into a short film or something because itâs so funny!'

Several aspects of this album are equally close to home, such as the title Why Are You Ok, which has spurred some very interesting theories online where reviewers and fans have tried deciphering its meaning. Truth is, it was all done by one of Benâs daughters who was playing around on his phone and had, without him realising it, opened an email. Whatever it was she actually typed, it got autocorrected into Why Are You Ok, 'There was no punctuation' Ben laughs, 'it was like some exsistential mystery that at least makes us look more sophisticated or deepâ.

âThe reason I knew it was the perfect album title was that most of the albums have had inside joke attachments to them or something that made it hard to explain, so to make it harder for myself in interviews, I knew this was the way to goâ.

The song features Dinosaur Jr.âs J. Mascis, and is according to Ben 8 years in the making, âItâs way too old. It should have left the house a long time agoâ. He explains that the song just wouldnât co-operate, he could never get it right. He gets stuck in his song writing ways, and finds it very hard to be versatile, and just couldnât seem to adapt the song to get it over the hump. Still he refused to give up on the song, or as he puts it: âon the damn thingâ, but it eventually became a song heâs really proud of. âItâs a bit bananas too. All the trusted people I worked with, even the band guys, none of them could really understand what it was I was trying to do. All these voices are clashing and itâs almost at a lack of a chorus. There are so many things talking on top of each other, but the cacophony of all those voices going togetherâ¦ Iâm so pleased, itâs like I finally snuck it past the goalieâ.

Getting it past the management people wasnât easy either as it turns out, the general response was that he âalmost had itâ, but Ben still refused to give up on it, even holding on the mixing of the album until he could get it right. But now, in its final version, itâs even rumoured to be a candidate for the second single off the album. âItâs a song you have to listen to again, because thereâs so much distraction, you feel so confused at the end, you have to listen just one more time.

And for all the online discussions about what it really was he found in the drawer: That came from Ben searching for inspiration for a new lyric, and looking around in a drawer to find an old momento or something to trigger a memory. âIâll just sing âFound it in a drawerâ! Like, I found a song in there basicallyâ.

Despite growing popularity, having musical legends popping up on their albums, and touring the far corners of the world, their musical aspirations havenât quite reached Pyramid Stage at Glastonbury territory yet. âThereâs no way we could do that. Weâd probably shoot ourselves in the foot somehow. And theyâd never ask usâ, Ben grins, âmaybe weâll get the legacy slot 30 years from now, but I donât think thatâs gonna happen either, sorryâ.

âWeâve always been one of those bands thatâ¦ Weâve always been dealt repeated blows of expectations being shattered. Even coming to Ãya the first time was like âYay, we get to go to Europe!â but then when we got there people sang our lyrics back to us, and all we could think was âthis is absurdââ. He explains that they come from very humble means in the music industry, and always thought that if you got to tour a little bit around the pacific north west of America, then you were doing pretty good. Theyâve always been happily grasping onto whatever rung of the ladder theyâre on, and if ever theyâre aspiring to something more, itâs doing a better job. âLive in the moment, not the next one. Doing your promo correctly, doing your show correctly. Being in that moment enough to not let it pass you by.â

âWhatever happens happens, and as long as youâre doing a decent job and enjoy what youâre doing, then youâre in the right place and you donât need anything elseâ.

Read the interview in Norwegian HERE!
Anbefal til andre Tweet 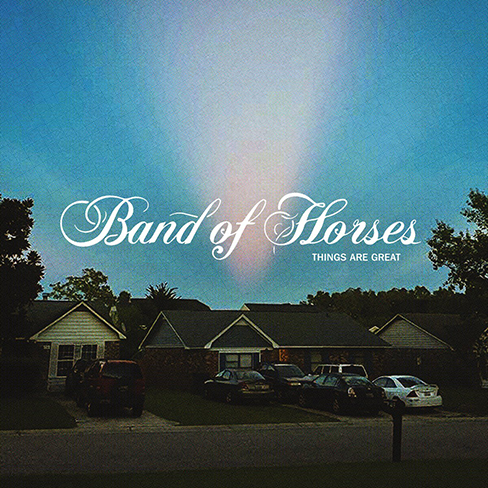 Band of Horses - Things are Great